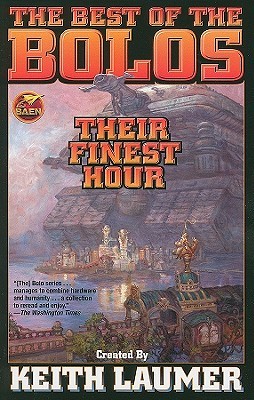 This book is a collection of stories featuring Bolos which are weapons/tanks with sentient AIs. Keith Laumer’s stories are from the sixties, and the rest are from the nineties. Most of them center on some military situation Bolos involved (hence the name), revealing titbits from the backstory, history, and the world around the tanks.

I would have liked a better knowledge of the world while I read the short stories. It wasn’t because they were badly written. It was because it would have deepened my connection to the world and the characters. But despite that, I liked the book. It is good pulp military sci-fi and surprised me with the quality, diversity, and criticism towards humans. (Okay, most military sci-fi examinates humanity from a critical perspective, and I shouldn’t have been so surprised.) The main characters ranged from female to male to different ethnicities to personalities, making the stories more alive. That said, I felt most sympathy towards the war machine than the humans, but often enough that was the point. Bolos weren’t the ones making the war. It was humans and their counterparts.

One story featuring a “dumb” Bolo, sitting center of the town got to me. It was one of my favorites. There were poetry and play of contradictions in it with a bittersweet ending. I’m glad my husband “forced” me to read my first Bolo collection. I understand why he loved them while growing up. They are good military sci-fi and a lot deeper than you would expect from pulp fiction.

Thank you for reading!