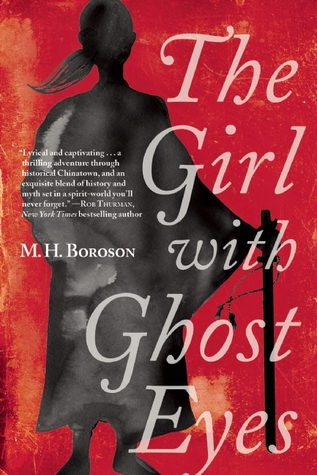 This book is like Spirited Away for adults mixed with old kung-fu movies and immigration history (from China to San Francisco.) It instantly drew me in with fast action scenes and immediate language, and I kept thinking this will be great, it combines so many elements I love, starting from ghosts and reimagining history with powers beyond our world. And the main character, Li-lin, is sympathetic and someone to identify with.

But as the story progressed, the plot twist began to annoy me. I got the feeling the twists were done just to make an event happen, breaking the illusion of things unraveling on their own accord. For example, the constant attacks to Li-lin’s father who is powerful beyond this world seemed to happen because of recklessness and carelessness, and a man of his status and age wouldn’t make such mistakes not even how blind he was to his own daughter and what was going on. He knew Li-lin was attacked to get to him. So he wouldn’t just walk out of the infirmary and not expect to be attacked again instantly. These kinds of small details got to me. I can look past one, but several and they as I wrote already break the illusion of the book.

That said, the book has merit. It has a great atmosphere, Li-lin is a compelling character (maybe she is a bit naive and simple and too perfect as flaws make characters enjoyable, but still she felt real,) and the setting and playing with history makes the book better than just another story amongst other fantasy books. This series has potential. I’m not sure where Li-lin’s life will go as the ending takes the series to a different path, but it might be interesting.

Thank you for reading! Have an amazing day ❤

0 comments on “Book Review: The Girl with Ghost Eyes by M.H. Boroson”