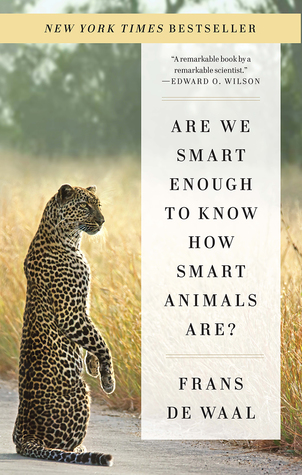 Fantastic book. That pretty much sums it up. See you later… Okay, maybe I should say more. The title is a bit misleading, only slightly. This book is not about a competition of intelligence between humans and animals, despite many scientists and laypeople might find it so (and find it hard to accept that animals are intelligent at all.) This book is about telling the differences and similarities in our intelligence, both of which are due to ecological necessities. If we want to get to the “who is smarter” debate, in many ways, animals beat us, for example, with memory. But back to the real matter, to the fact that ecological and physical necessities shape our intelligence to function best in the environment we habit with the shape and size we come. So if we want to measure intelligence, we have to take into account the environment, opposable thumbs or peaks or tentacles or not, the behavior in nature: food-collecting, child-rearing, running circles in malls, and so on to get a clearer picture. Then not so surprising answer is that it seems we are all smart, of course, there are individual differences in species, but that is only natural.

This is pretty much what the book does. It goes over what kind of intelligence is necessary for birds, octopi, wasps, monkeys, dogs, and so on to function, drawing examples from studies done — one interesting fact about the difference between wolves and dogs, it was generally believed that dogs were smarter than wolves because they reacted better to us, but that is a lousy way to measure intelligence. Actually, they found out that wolf puppies raised by humans were able to tackle the same problems as dogs, but wolves looked less at human faces than dogs and were more self-reliant. (Where a dog couldn’t solve a problem, it looked confirmation from a human unlike a wolf would, who kept trying on their own.) De Waal writes that this is more to do with temperament and relationship to us than intelligence.

One of the most important facts in the book was learning. Such an action is not only reserved to us humans. All animals do it, meaning the idea that animals are born with intrinsic nature, which it starts to fill like an automaton is a very restrictive and downright wrong view about animals, even wasps. This all also comes back to the silly old debate about nature vs. nurture. (I have never understood why not both? Why some scientists go so overboard and see only genes and others only culture, it seems such a restricted world view. I know it would make things simpler if we were just automatons, following a pre-programmed program. It would make us easier to rule, and it would forgive us for our failings as there is nothing we can do; it is my nature. But to think it is all down to culture, that we have no temperament, that you can shape anyone to a mold of your desire is again so silly that I wonder what on earth they are thinking.) Learning has been tested, for example, with birds and primates, teaching new habits to them and seeing how they spread from generation to another, ingroup, or from one group to another. It seems like animals can pick up new useful skills. No surprise there.

Okay, maybe I should go back to judging the book. This book is fantastic. It goes over studies done on animal intelligence. (The main focus is on primates as it is Frans de Waal’s specialty.) Criticizes a few of them. I know some reviewers have complained about the language, but I had no problems with it or the structure of the book or anything else. The last two chapters might have needed revision as they were the only chapters I didn’t find as engaging as the others, but that might have been because of something personal going on. Altogether, one of the best books I have read this year. My copy is folded and full of notes, as there was so much I found interesting and valuable. I loved this book.

Thank you for reading and have an animal-full day!

0 comments on “Book Review: Are We Smart Enough to Know How Smart Animals Are? by Frans de Waal”