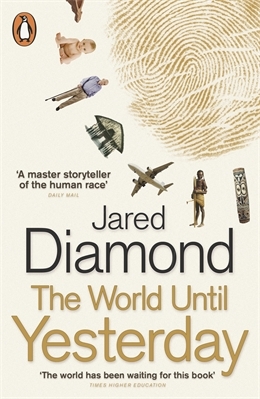 A good book or not a good book that is debatable. There are chapters and pages in which I wondered the purpose of the book, and if this was really from the same writer of Gun, Germs, and Steel and Collapse. Two books which I think everyone should read. The confusion wasn’t because of his personal accounts what has happened in his field studies, but chapters that seemed thin and not so well put together and pointless. Before you stop reading my review and conclude that this is not a book for me, wait. There were several good chapters where the comparison between Western societies and traditional societies were valuable. For me, those were Peace and War and Young and Old. Those two chapters make up everything. There is also a short chapter about religion, and while it is not mind-blowing, it is a good summary of the reasons why we have religions and why even when they are costly, they might aid survival.

The whole book is one long argumentation of the benefits of traditional society when it comes to child-rearing, taking care of the elderly, living together with others and not feeling alienated and isolated, and praise for their ingenuity. Diamond says that there is a lot we should learn from these disappearing traditional societies before we think the Western way of life is the norm, that diet, consumption, and individualism danger our lives and cause us psychological and physiological problems. I don’t disagree at all with him, but the book felt repetitive and stating the obvious.  Yet I liked bits like this:

“The flip side of that overriding emphasis on social networks in traditional societies is our greater emphasis on the individual in modern state societies, especially in the United States. We not only permit, we actually encourage, individuals to advance themselves, to win, and to gain advantages at the expense of others. In many of our business transactions we aim to maximize our own profit, and never mind the feelings of the person on the other side of the table on whom we have succeeded in inflicting a loss. Even children’s games in the U.S. commonly are contests of winning and losing. That isn’t so in traditional New Guinea society, where children’s play involves cooperation rather than winning and losing.
“For instance, the anthropologist Jane Goodale watched a group of children (the Kaulong people of New Britain) who had been given a bunch of bananas sufficient to provide one banana for each child. The children proceeded to play a game. Instead of a contest in which each child sought to win the biggest banana, each child cut his/her banana into two equal halves, ate one half, offered the other half to another child, and in turn received half of that child’s banana. Then each child proceeded to cut that uneaten half of the banana into two equal quarters, ate one of the quarters, offered the other quarter to another child, and received another child’s uneaten quarter banana in return. The game went on for five cycles, as the residual piece of banana was broken into equal eights, then into equal sixteenths, until finally each child ate the stub representing one-thirty-second of the original banana, gave the other last thirty-second to another child to eat, and received and ate the last thirty-second of another banana from still another child. That whole play ritual was part of the practicing by which New Guinea children learn to share, and not to seek an advantage for themselves.”

As I read that part, the idea of a game being like that sounded alien to me. It seemed more like sharing to me than an actual game, but that was the point. I have taught early on that games are about winning, being better than others. This is also so in school rooms where we compete to get better grades to succeed in life instead of cooperating so that the whole society enjoys the accumulated knowledge. The western world is riddled with losers. That is a hurtful mentality both for the individual and for the community. Had we just lost someone valuable, and for what?

But to conclude, Jared Diamond doesn’t romanticize traditional society. For example, he points out that life expectancy is lower in traditional societies and not only because of scarce food and medication but also because of violence and risk. So read this book or not? I would say, read it. The first pages are a chore, but they are followed by the two chapters I liked the most. I have mixed feelings about the last chapters. There are good bits, but then there is a lot of repetition, stating the obvious, and to some too much personal preference.

Thank you for reading and have a lovely day!

0 comments on “Book Review: The World Until Yesterday by Jared Diamond”