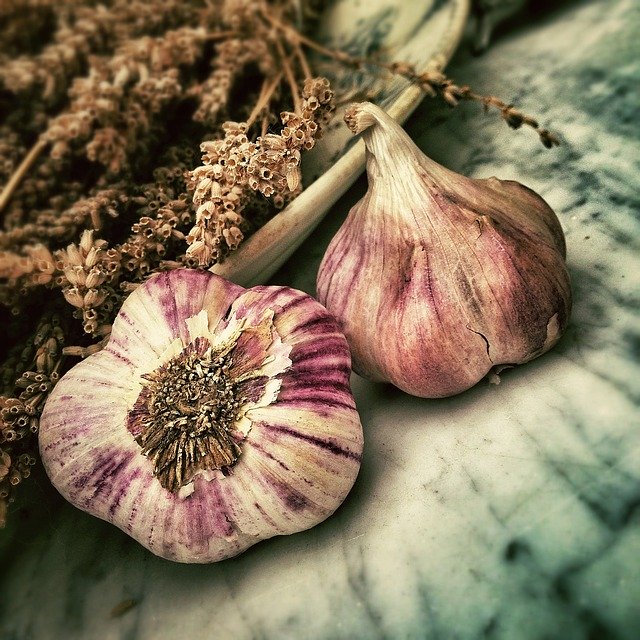 She had been helping her aunt’s friend all week, running errands, cleaning, and cooking. The old woman had taken ill and had been curled up in her bed several days now. Today was especially bad. The woman wheezed repeatedly. Every now and then, she poked her head into the bedroom to see the woman was still alive, but there was no mistaking her livity from the snoring she did. But you had to check, or so her instincts told her.

Now it was time to make soup. Ginger, chicken, and potato. A special request. And she almost forgot the garlic. Lots of it. The chicken was already cut into manageable chunks. The potatoes were peeled. The ginger was chopped fine, but there was no garlic anywhere in the kitchen. She had to have forgotten it in the shop. She was sure she had bought it, but the idea of checking the recipe and seeing it in black and white that she had not only made a fool of herself but also wasted the old woman’s money didn’t sound appealing. The cottage the old woman lived in was nice, but nothing was new. Everything looked as ancient as the woman.

She sighed. Would the woman mind? But she had been particular about the garlic, and there was something in the way she said it that made you not want to cross her. The funny thing was that the frail woman was two feet shorter than she was, still she was afraid of her. The hunched back, the friendly smile, the peering eyes, and two tight buns over her head looking like ears made from her long white hair made her somehow scary. It had to be her tone. Why had her aunt sent her here?

Yes, yes, yes, she needed the job, and it was her duty to help the elderly and the sick. Also, her aunt had looked her a funny way. But she had to admit the week away from the city and enjoying the huge herb and flower garden was the best time she had had in a long time. It was just that, the place was a long way from the city, and if she was going to fetch the garlic, she would have to take the bus. Then for sure, she would be late with dinner.

And before she noticed the woman was there at the kitchen door looking at her. Her white nightgown with small blue flowers came to her ankles, and her light blue furry slippers kept her bare feet warm.

“I was just making the soup,” she said before the woman could accuse her of staling.

“I came to get water,” the woman replied, looking her from head to toe.

She wanted the quiver but stopped the shivers going all over her body. “You could have asked me to bring you a glass.”

“I don’t want to be a bother. I can get it myself. And you know what they say, walking does you good.” The woman’s words sounded accusing even how nice they were. She was sure she had done something wrong. Not checked her often enough or something else along those lines.

“Did you get the garlic?” the woman asked as she skied with her slippers across the kitchen floor.

The woman tapped her nose. “It has such a strong scent, doesn’t it?”

She groaned. She hadn’t meant to.

How could she even smell anything? All the snoring and wheezing.

“We all make mistakes. It is how we handle them that makes a person. So?” the woman asked as she poured herself a glass from the tap.

“But it will take so long to get into the city with the bus, and I have already prepared all this, and then the dinner will be late at least an hour if even more.” She tried her best.

“We always follow recipes to the detail, leaving something out alters the whole fabric of the substance, and then what we have might cause things we didn’t plan.” The woman took a sip.

“But this is chicken soup,” she blurted out.

“Even more so important, a soup that will nourish us, ingredients that have been harvested and died for us.” The woman lowered the glass down and coughed.

“Yes, of course,” she answered, despite not believing a word she said.

“You can take the Vespa in the garage. It will get you into the city in no time. The keys are at the bowl there.”

“Sure.” She had lost the will to argue back. To say that the bus would get her into the city quicker.

The old woman again skied across the kitchen. Before she disappeared back into the bedroom, she said, “Mind it, it has a temper.” Then she was gone.

She shook her head and put the chicken, the potatoes, and the ginger into the fridge and went to get her purse and jacket.

As the woman had said, there was a Vespa in the garage under a large faded brown blanket. The Vespa was light blue and impeccable. The thing was from the sixties, yet it looked brand new. She sat on it and pushed the key on the ignition, and drove it out of the garage. The engine purred like a well-fed cat. She got up, shut the doors behind her, and then walked the thing out through the garden gates.

She got back on the Vespa and turned the engine on. She drove along the country road so close to the side that she was sure at some point she would fall into the ditch. But soon she forgot to be afraid, as the changing scenery with fields and trees began to make her enjoy herself. She felt like she was flying. That there was nothing she couldn’t do. That the flow would carry her own. She smiled and glanced at the speedometer, but instead of seeing the dial, the ground was stretching far underneath her. The river was making loops around the farmlands, the roads were like tiny snakes trying to get away from the houses. And she could see the old woman riding the Vespa into the city with goggles on and her two white buns shaking as she laughed.

Thank you for reading! Have a lovely day!

This story came to be because I was joking with my husband, listening to a motorcycle being tuned. I asked that if he would get me one. And he asked what kind. And I said a flying light blue Vespa, and then that image was accompanied by the old small, frail woman with two white ear buns laughing away. I had to write about her. And no Vespa isn’t sponsoring me. It is just an iconic vehicle. It was also the first thing that came to my mind.