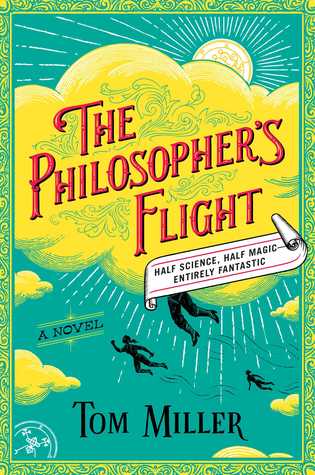 The Philosopher’s Flight is a unique book with a multilayered story and exciting new magical system, empirical philosophy, especially sigilry. Sigils are way one can fly and perform jumps from one place to another. Flying and transporting is in the central part of the book, and that might sound dull, but it is far from it. Tom Miller knows how to spin a tale. The layers don’t stop there. This is also a book about sexism, war, about politics and science vs. back watered customs. There are so many things to latch on to and be in awe of the well-actualized world. Robert Weekes, the protagonist, tries to get ahead in his life and become a part of the Rescue and Evacuation team and join the fight, World War 1, overseas. This is his growing up story of how to become a better flier in a woman-dominated field, where misandry might get him killed or, at least, kicked out of the almost all female school. Robert is a compelling character who is a pleasure to follow. He is joined with a powerful cast of women and other side characters, which are given room to develop and be persons of their own, and don’t only oppose Robert or agree with him.

The trouble with this book is that it has a slow start, so you need to stick with it to get to the “good parts” when Weekes leaves home to school and becomes part of Radcliffe’s flight team. The book is worth it. Because it is topical with taking a stand against sexism, exclusion, war, racist and violent movements, and of course, by promoting the need for scientific method and reason. But there is another problem with this book, it is difficult to put in any category, which might cause head scratching in targeting an audience. Robert Weekes is eighteen years old, but this is not a YA book nor is this purely an adult book, either. So it stands between those two realms alienating readers from both sides. To set things straight, this works for both. The situation and the world have the gravitas needed to care about the social meanders of the youth, yet, giving this magical school vibe for younger readers with school dynamics and issues.

But all the troubles I mentioned before are what make this exceptional book. Tom Miller is willing to break the boundaries of categories (fantasy or science fiction, YA or Adult…) to deliver a story worthy of telling, a story of exclusion and small-mindedness from both the women and the trenchers’ part. The world doesn’t change if we get stuck with customs and are unwilling to look at the facts. Facts like a boy might be able to fly, and the opposite here in our universe—an excellent book which deserves a spotlight.

Thank you for reading! Have a cloudless day and fly high, my friend ❤

0 comments on “Book Review: The Philosopher’s Flight by Tom Miller”