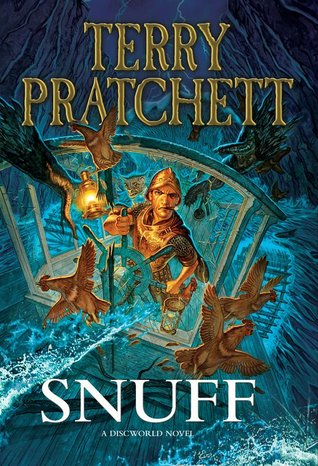 This book is about goblins and prejudice, going to the countryside, murder, and smuggling. Vimes is having a holiday and, of course, there will be a murder, how else he is supposed to function. But more so, this book is about prejudice, the worst kind—the kind which sees the other as a thing. When you consider someone as a thing and paint their lives with a big brush, it is an easy road to violence, abuse, and exploitation. Pratchett points this out several times in the book, making Snuff not as jovial as the other books, which is odd to say because Discworld has always touched serious issues. But here, Pratchett doesn’t even try to hide it behind a joke or absurd story. This book is brutal and dry, making it a very different read and challenging at times. The difference also comes from the style. There is more joking around about Jane Austen kind of setting and Victorian-era ideals rather than the usual puns. Still, this is Terry Pratchett’s book.

As always, Pratchett has based his book on actual research. Seeing someone as a thing is a way to desensitize one conscience and treat the other as pleased for whatever reason. People don’t even notice themselves being horrible. This is the reason slavery, genocides, and ignoring and abuse are possible. The brain reacts differently when the other is seen as a thing tainting no moral convictions. So, Pratchett is speaking about a fundamental matter here. He even plays with the dirty and smelly concept with the goblins how the other has been seen throughout history. This is ever more important now with gender and racial issues. Also, if and when the possible economy drag follows our current events; such time makes it easier to target the other. History has shown this repeatedly.

I love the book for all I wrote before, but unfortunately, there is something wrong with the pacing and details. The actual murder and smuggling plot feels stuffy; maybe it is because the story is stalled to give Vimes time to roam around the countryside. While Vimes is always a pleasure to follow, especially in the company his lovely manservant, Willikins, I feel it does disloyalty to the plot and the issue Pratchett speaks. I got lost in the details several times, and I couldn’t be bothered with them. It is not easy to balance jovial tone and what has to be said and done for the plot to work. It is darn hard, and Pratchett has pulled it off so many times before, but here he is getting darker and angrier to try to lighten the mood. And I don’t mind that, what I mind is how all the tedious parts murky the point he is making. All lives matter, and no one should be killed, slaved, and treated like a thing just because of who they are.

Thank you for reading, have a pleasant day ❤