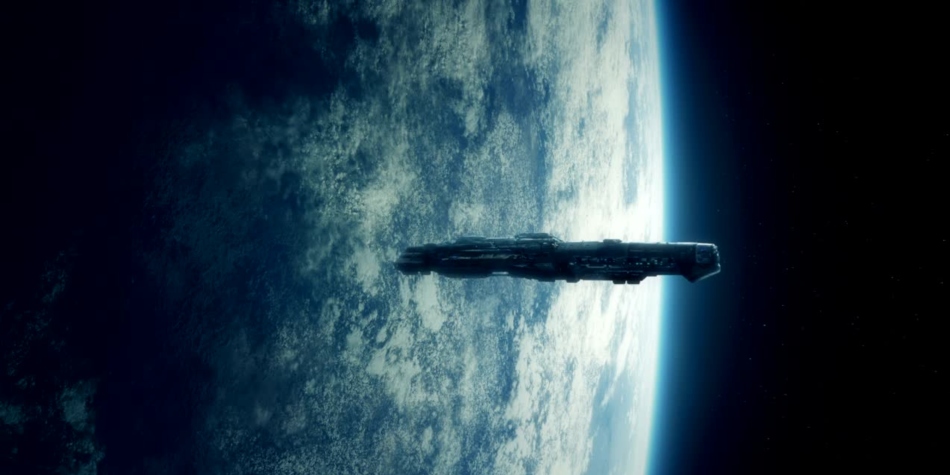 She blinked at the piercing light, waking to a massive headache. Then she remembered fighting and being knocked cold when making her way through the hangar to her ship. Or everything could be a trick of last night drinking, and she had gone to bed with some asshole who thought bright rooms were in fashion. They weren’t. Neither was whatever this was. Either way, mistakes had been made.

She got up to sit, feeling the entire room sway. She found it still difficult to focus past the light, and the headache was making weird patterns all over her vision. She reached at the back of her head, finding a pump there. Shit, she thought. Not one-night stand gone bad then. Still, it could be. But then she had picked up a helluva girl from the bar. Oh well. Whatever had happened, it was better if she get out of here as fast as she could or even figure out where on Earth here was.

She blinked twice, wishing it would help her adjust to the light, but she was beginning to gather there was no adjusting to it. It was made especially thusly, meaning she had pissed off some very serious people. If this was a robbery, it was an elaborate one, and she still had her organs intact, so the ship then.

“So,” she said, testing to see if there was anyone else in the room or if they, whoever they were, had their coms on.

She went on anyway. “You could have just asked. No need to knock a girl down and drag her to your light party. Simple questions or, better yet, an invitation usually does the trick. You could have just said that I won a trip to a pretty room. Let us take you there.” She waited for a bit.

“Okay, maybe you are right. It would have taken more than that to come with you.”

She wondered, was this government shit or a private person or another shady organization who thought kidnapping her would be a bright idea? She was sure she hadn’t stepped on anyone’s toes lately. Not that anyone really could. The fast-spreading virus had made them tighten border control between the planets. So past year, she had been doing your standard transport stuff without bringing in the extra income of selling rare fruits and so on at the black market.

The lights dimmed, and she saw she was in a room made entirely of light panels. She was on the floor, and there was nothing there but a small dent on the wall, showing a door. She wasn’t sure if she should stand up and prepare if some knucklehead was coming in or test the door if it was left open to make this some form of a horror-survival game for the rich and powerful. She ignored her mind jumping there. Instead, she pushed up, feeling light-headed. Still, her legs carried her. She didn’t get far.

Nina wanted to snort that what kind of idiot wasn’t sure who they had kidnapped? She didn’t as what idiot pissed off someone who had the power to dispose of you or, in her case, blind her insane. “Hopefully, but I could be wrong. I seem to have a concussion.”

“We are sorry about that. But, unfortunately, one of our associates got carried away,” the man’s voice coming from the walls said.

Nina couldn’t help but think the man had lost it. When someone in space starts to talk about themselves in the third person, it is time to take away their keys and lock them in a padded room. Then, of course, there could be a general we and our.

“Next time, I would prefer a card and a box of chocolates,” Nina replied.

“We will make a note of that.”

There was a long silence.

“We are unsure what the question means.” The voice returned.

Nina stopped herself, making a joke. “I meant what do you want from me?”

“You wanted me for that? I have to say there are far better professional teachers out there. Just look from the registry,” Nina said and regretted it instantly.

There came laughter. It was metallic and empty, as if someone wasn’t used to laughing and wasn’t actually sure why it was for and how it was done.

“So?” she asked when the sound stopped. She was glad. It was creeping her out. The entire conversation was. She had been in tricky situations before, but they had followed the normal rules. Hit, whack, give me your money, or we harm you if you don’t do as you are told, not hollow laughter.

“We need you to transport a shipment out of the planet past the customs. Will you agree?”

Smuggling. She had known it. Not that it was hard to figure out. She wasn’t exactly good at anything other than flying ships.

Nina wanted to whistle. She would have to work hard to earn such cash in a year. What they wanted her to smuggle had to be something really fucked up. So any reasonable person would say no. She wasn’t one. Nina kind of liked the idea of scoring big or going down in flames. “You’ll pay me half upfront and rest when I return,” she said.

“We can pay you the total sum as soon as you leave the planet.”

“Wow,” she let out without meaning to do so.

“Is that an agreement?”

“Can you leave now?”

“Yeah, but it will take a couple of days to clear the customs, register a bogus shipment, and get a take-off permit.”

“All taken cared of.”

There was no backing away now. “Yeah, if you give me something to my headache,” Nina said, knowing they needed her ship, which was personally attached to its pilot, meaning her, as were all the ships; at least, those with pilots who knew how to keep themselves alive.

“We can do that. Don’t be alarmed,” the man said, and instantly the door opened.

Nina watched it curiously, and before she had time to move, a short blueish creature walked in on its two feet with a swelled belly.

“We beg of you, do nothing to harm them. We know this is the first time any of your species see what you call an alien, but I assure you, we are completely harmless.”

Nina nodded, too fixated on the creature to do anything else.

That seemed to satisfy the voice. “They are also the ones who you will be taking off the planet.”

Nina couldn’t answer, even if she wanted. The stranger’s skin glowed and caused patterns to form on it, shifting from almost blackish-blue to white.

“Are you there?” the voice asked.

“Now, please let them approach you. They will heal your headache.”

Nina couldn’t move or do anything. She let her eyes move along the creature’s body, whose bone-like stripes going up their almost human-like face. They were like a pixie from the fairytales she had read as a child, but a pixie who had a fishlike quality.

The creature stepped next to her, beckoning Nina to lower down. She kneeled next to them and let them touch her head. As soon as they did, she was washed with a cold, wavelike light of blues and greens, and she saw the creatures home planet, the fact that they needed to travel there to give birth, and that they were here to observe and learn if humans were a threat to them. The headache was gone as the creature let go of her head, and the room was dim, and the only thing glowing there was the creature themself.

Thank you for reading, and have a beautiful day ❤

0 comments on “Short Story: A Pilot”