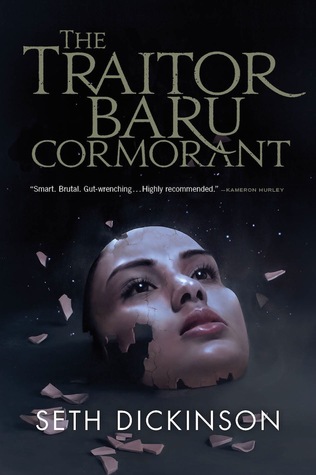 This is a story about imperialism and Baru Cormorant, who has to figure out her identity and alliance when her home island is invaded by the Empire of Masks. Baru is a savant (as the book keeps repeatedly stating, especially in the middle of the book, so much that I hate the word) even as a child. She can figure out connections and the bigger picture just by looking at things. As a character, she can easily turn off the reader as her calculative nature and disregard for her emotions appear coldhearted. In my opinion, she isn’t. It’s just that she understands the cost of everything, including her aspirations and decisions. Baru is taken from her parents as a child and schooled by the empire to become their civil servant. They teach her that her native ways are impure and perverted or unhygienic, as the book states. Seth Dickinson has done his research regarding imperialism and its costs. You can see it in the dialogue, Baru’s thoughts, and plot. Not to mention, he takes a jab at fiat money and moneylending, which warms this reader’s heart. As an ultimate test of her new empire, Baru is sent overseas to Aurdwynn to be the one who controls its money. The place is ready to rebel against the empire, and she has to keep her life and loyalties in check. I won’t go too much into the plot as it must be read and experienced.

The themes of the book are, as stated before, imperialism, the cost of it, personal growth and loyalties, what it is to be a woman and how as a woman you can choose the life you want to live, sexuality and any deviation from the norm seen as unhygienic, money and politics, freedoms and rights of the people, and love. I’m sure I’m missing some of the themes. This is because the book handles so many subjects and takes a jab at our politics and history. And I like it. The book dares to let an unlikely and somewhat unlikeable (not in my opinion) character be the protagonist. It even concentrates on politics and accounting, which could easily be a turnoff for some, but Seth Dickinson makes it personal, likable, and relevant. It is partly because of the beautiful prose, but mainly because of the balance between details and Baru’s internal thoughts.

As you can see, I liked the book and a lot. But it wasn’t perfect, far from it. For example, I hated the mask gimmick of the book, how everyone in the empire wears them and how the throne is built around the concept (I cannot go into too many details to spoil the book for you.) It breaks the narration and believability. I get it, but it is more about my emotional dislike for the plot tool. Another thing I disliked was throwing around the word savant. Honesty, Baru was highly intelligent, but a savant? No, not how I understand the term. Baru’s personality wasn’t taken far enough for her to be a savant in my eyes. Also, I was annoyed by the dialogue tags like she is a savant; I am a savant…she is a savant; I am a savant… ad infinitum. As you can see, the word didn’t ring right to my ear, and this is most probably a problem I have to deal with rather than the book’s. Then there was the pacing of the plot. The start is strong and has a clear direction, so does the ending, but the middle part of the book is extended and meanders around as if looking for that point and a way to get back to it. But as a writer myself, I know cutting out details and scenes as useless is painful and impossible, so I don’t hold it against the book.

So did the book awaken any thoughts or emotions in me to make it something I want to return to. Unfortunately, the only place I seem to transport back is the beginning of the book, as Baru is figuring out what it means for the empire to come to her home island. I want to go back to those blue waters and tranquil moments. How about the themes, then? None of them made me go aha, or hmm, I need to think about this. Mostly, the book was preaching to the choir. That doesn’t mean it is terrible, just that maybe this would have hit me and hard, say, five to ten years ago. If there is a thought, I carry with me is the fact that the days of imperialism aren’t over. The methods have only changed. Look at the current politics and turmoils going in the world, and you see it is alive and wreaking havoc. I mean not only cultural imperialism; seizing assets and making money float into the empire is going on cheerfully. And if you read between the lines (no, you don’t even have to do that, there it is on the pages of the book, clear and loud), you can hear the echoes of it in this brilliant story.

Thank you for reading. Have a splendid day ❤