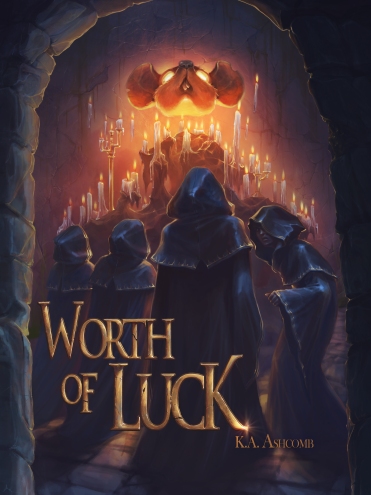 Harriet woke up in the pitch-dark cage; it slightly rocked from side to side. The motion made her sick to her stomach. Her head hurt and she felt disorientated. She stood up after lying there for awhile. When she stood, the cage swayed violently, and she almost lost her balance. Harriet steadied herself, straightened her back, and smoothed the wrinkles in her governess dress. When she had gathered her dignity and wrapped her head around the situation, she assumed a posture of authority and listened for anything happening outside the cage. For now, all was quiet.

All right, it’s kind of situation, she thought. No panic. Harriet had seen worse. This wasn’t the first time she was at the mercy of someone else, and she reasoned it wouldn’t be the last time. She had survived Leporidae Lop’s court all these years, so she could handle this situation with ease. First thing to do was to get out of the cage by either breaking it or reasoning her way out. She tried the latter first.

Her voice was too weak for her own liking.
She coughed.

No sound came form the darkness.

All right, she thought, let’s continue on the harmless route and see where it leads. “I seem to have gotten myself stuck here. I would appreciate any help,” she said.

For a while, all remained quiet, the kind of silence when somebody tries not to be there, but Harriet was sure she heard, a male voice say, “Not a word.”

All right, that meant there were at least two of them.

She tried asking for help a few more times without results. Playing dumb and nice didn’t work. Good. It really wasn’t her style.

“Let me out of the cage this instant,” she said in her sternest voice. It sounded like a leather whip hitting against a marble wall.

Her words caused a rattle outside, and she was sure a fight had broken out because she heard tumbling and heavy breathing. She rooted for the fellow who had found her voice compelling.

She rooted for the wrong fellow.

“Put this in your ears,” someone said, breathing heavily. “Now.”

“Say something,” a new voice, which sounded squeaky, said.

“What?” the first fellow asked.

“I can’t hear you,” the other one replied.

A few more “I can’t hear yous” were exchanged before the cage began to move again.

So, her demand didn’t go through, but no sweat. Her next avenue of escape was to find flaws in the cage’s design. She had designed the thing, after all. But finding defects one’s own design wasn’t as easy as you might think, because Harriet struggled to find any. She knew the cage to be simply ironclad because she had made it. She went over the design a few more times just to be sure. No, no luck whatsoever. The cage was unbreakable, no matter how she approached it. For the first time in her life, she needed someone to question her. Most Leporidae Lops would have happily lined up to do just that and more, if given an opportunity, but that was denied them as Harriet was escorted out of the kingdom. What a shame, because Leporidae Lops would have needed it. Anyway, too bad.

Harriet sensed in her bones that the cage was leaving her beloved home. They ached. This was the first time she had been out of Leporidae Lop.

A few hours later, and after several nervous breakdowns, a gust of wind fluttered the grey wool fabric covering the cage.

The sun leaked in. Harriet stood up and took a step closer to the bars. Soon she heard the two male voices from earlier, one winded and one squeaky. The cage stopped moving. She wanted to see.

Despite what she knew about the cage, she tried to grab the fluttering fabric. As her hands brushed against the cage bars, they electrocuted her with a purple light. She snatched her hand back. She tried again, but the electric shocks were too painful to bear. Harriet had to wait for the wind to scoop off the fabric. To her misfortune, the fabric only fluttered a little at the foot of the cage. Too little for her to see out. Then someone began to fasten it. Harriet made a dive for the hand, but the electric shock stopped her. This time her effort wasn’t futile, because whoever the hand belonged made a high pitch scream as his hand got fried along with Harriet’s.

A loud but short argument broke out.

“Let’s get going, before someone notices us,” a man said, ending the quarrel.

“I still think we should abandon her. We already got paid.”

“We can’t leave her to be found by some poor bastard. We finish this.”

“Alright,” the other one said with a groan.

Soon the cage moved again, accompanied by a short neigh.

Harriet massaged her electrocuted hand and plotted a beheading. More like two of them.

The rest of the book can be found here:

Thank you for reading!

0 comments on “Worth of Luck, Chapter 11: Missing Harriet Stowe”